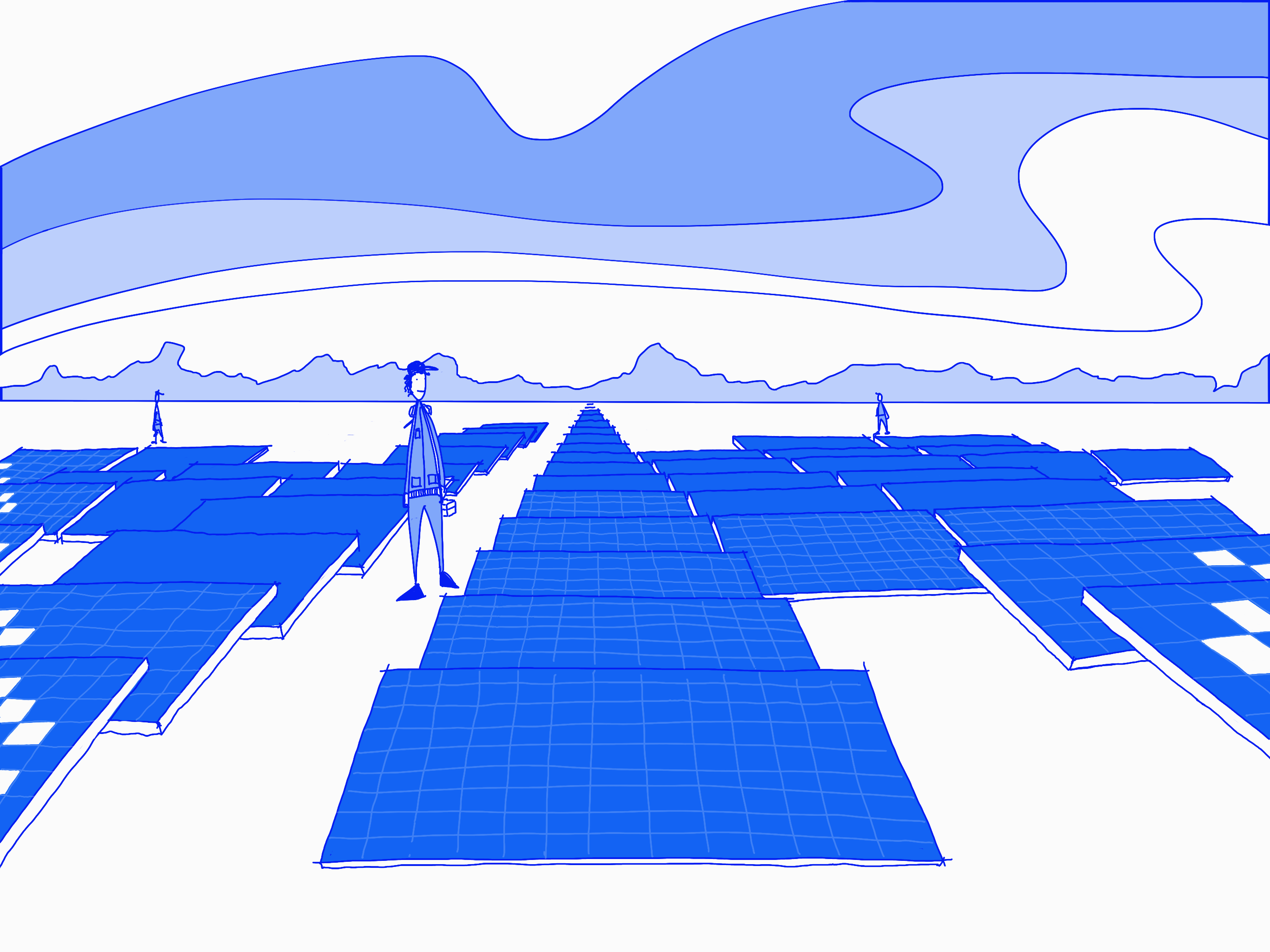 The Cost of Energy

On a new PV project, the installation cost would typically be the major factor considered. The capital cost would be measured relative to a payback period against the lifespan warranty of the panels themselves. A manufacturer will provide a warranty for 20–30 years, for the operation to remains above 80%. A significant development in the PV market has been the continued downward trajectory that this cost has taken. The cost for the same amount of electrical energy produced 10 years ago has gone down by over 80%. While not unexpected, this does change the conversation around PV. Projects can now either enjoy a lower capital investment, if other factors, such as space, are not a constraint. This then generates more energy for the same investment made years earlier.

There are several reasons for this continued reduction in price. These include the economics of scale, the impact of China entering this marketplace and the maturing of technology. Predictions for the future cost of PV show the continued reduction in price - even if the advancement in the technology is not even considered. Considering that the cost of PV installations no longer lead the conversation, that means we have solved the world’s energy problem? Not quite.

One company that has been trying to take advantage of this shift is Tesla (formerly SolarCity). Working to de-centralise the distribution of energy through the use of PV by using the urban sprawl and the roofs of houses. This allows the generation of electricity where none was made, only consumed. They’ve also managed to create the best looking building integrated photovoltaics (BIPV) commercially available in the market. Unfortunately, this particular solution has a limited scope for implementation. Buildings with higher power density usage cannot participate meaningfully. The lack of available traction can be explained by way of efficiency. The efficiency of a PV module is the electrical output divided by the incident light power. The more efficient a module, the more energy they generate, the smaller the number required. While the cost of ownership has gone down, the efficiency for similar types of commercially available PV panels have only seen an increase of around 5–7%. As such, while the economies of scale have had an impact, the use cases applications have not expanded noticeably.

It becomes clear that for commercial and dense urban environments that a more concentrated farm is the solution at the moment. Even when an installation set at 17% efficiency is provided, this will still only account for 6–8% of the total building energy. While not insignificant, the value would remain a discussion to be had over the benefits. There has to be a shift where this isn’t a discussion, rather an expectation. Maybe that number is closer to 20%, 30% or even 40%? When considering current PV technology, large solar farm installations reap the most benefit. At this scale the benefits are significant and the cost, relative to coal, is less.

Another consideration is that eventually the panels at these farms will need to be replaced. This is a huge burden on natural resources, necessary with the available technology. Alternative materials and technologies are needed to allow photovoltaics to become our primary source of power. A step change in the urban landscape will begin when the exciting strides that have begun in the field bear fruit. We are at the start of a new era in photovoltaic technology that has the power to democratise the generation of energy.

Moore’s law is the observation that the number of transistors in a dense integrated circuit doubles about every two years. While the following graph doesn’t follow Moore’s law, PV efficiencies present a similar upward trend. This technology alone will not affords us a  sustainable future but it has the potential of being the major component in that future. 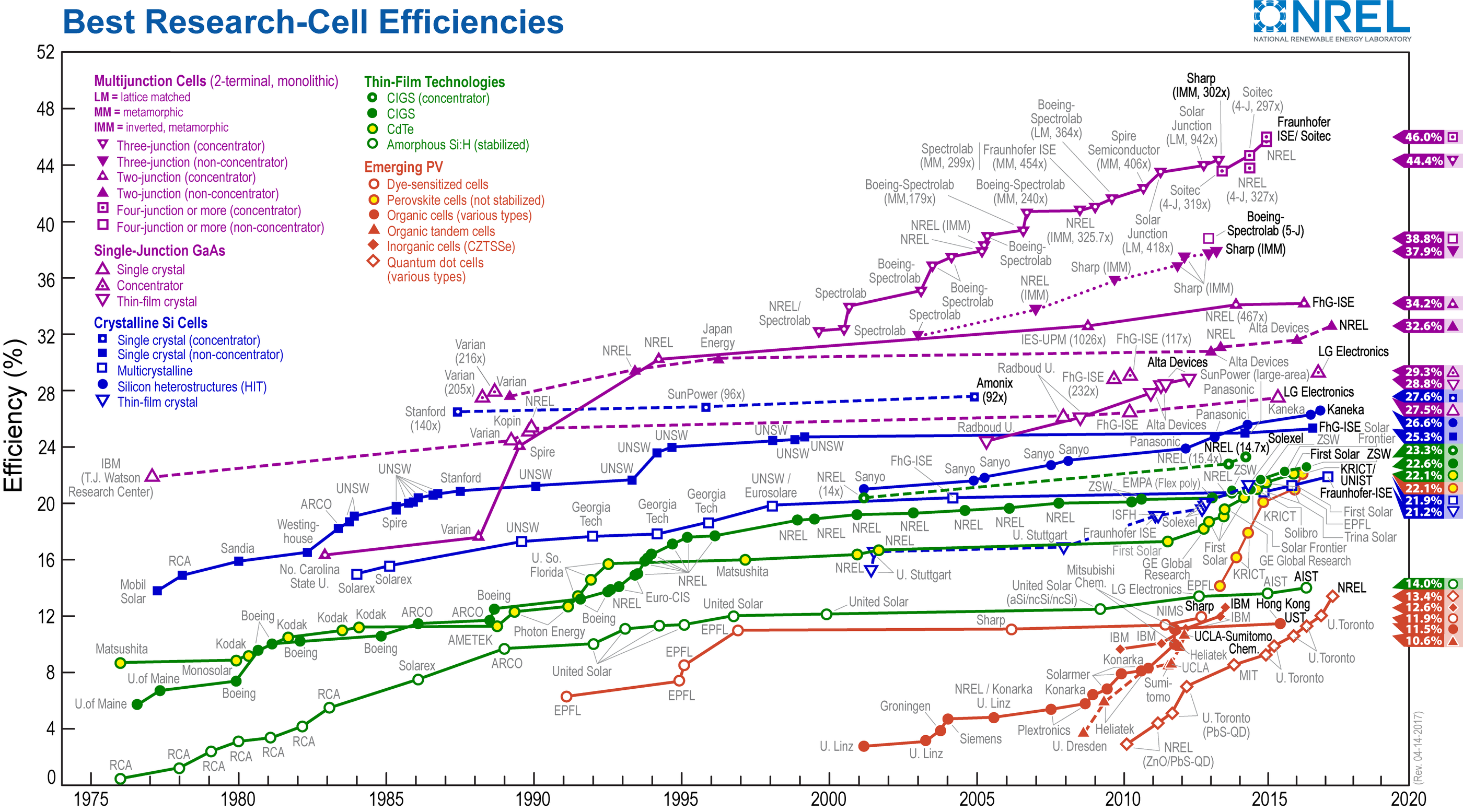 The NREL (National Renewable Energy Laboratory) PV efficiencies graph offers a fascinating perspective on the history of PV technology. Apart from the continued work towards increasing efficiencies, it also records the breadth of materials used in the crusade. Located in the bottom right hand corner is the most exciting part of the graph. This shows the development of the 3rd generation of PV technology (in orange). Achieving similar efficiencies in a fraction of the time, when compared with 1st and 2nd gen products. Defined by a crystalline silicone based construction (either single or multi-crystalline), 1st gen PV accounts for 95% of the market. Thin film technology, defines 2nd gen PV, accounts for 5% of the market. Used in Building Integrated Photovoltaics (BIPV), the technology integrates into all types of façades. This technology is being developed for integration into both new and existing panelling. The hope being that reducing the friction of implementation will enable BIPV installations to occur more frequently. The 3rd generation of photovoltaics was borne from a race, which began 10 years ago), to develop more efficient PV technology. None of these technologies have made it to market yet. The most promising technologies centre around Perovskite and Quantum Dot Cell. While emerging technologies have been in the lab for 10 years, they have yielded no commercial products.

To best understand the potential, we must understanding the efficiency landscape. Efficiencies are determined using standard test conditions, agreed industry wide. The theoretical maximum efficiency achievable by 1st gen solar cells hovers around 30%. This ceiling is closer to 44% for 3rd gen cells. The current state of energy generation from solar, while a success in itself, leaves much room for improvement. The theoretical now needs to pave the way to viable commercial products. 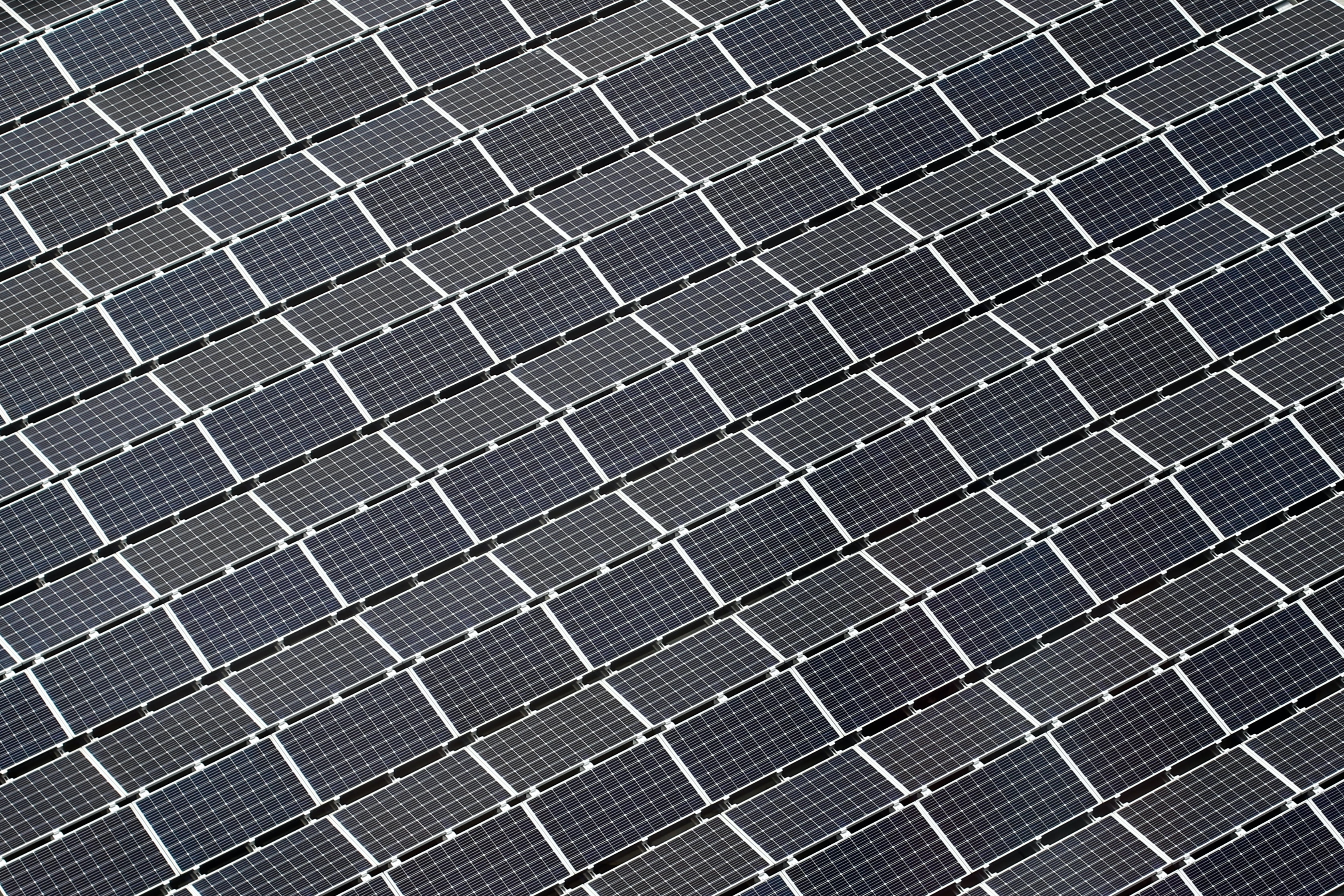 In 2013, Elon Musk predicted that solar would achieve dominance over the next 20 years. Currently in the 6th year of this prediction we are far from this reality. The silver lining being that we are moving in the right direction. Although the underlying principals are old, the field remains a thriving, fertile ground for material science research. Manufacturing conundrums and hurdles remain unanswered. The optimal solutions to convert energy from sunlight remain unresolved. Yet.

We live in a world with finite resources. The search for sustainable sources of energy is increasingly more critical as populations and their needs increase. Solar has the ability of playing a major role in ensuring this energy for future generations. The use of PV panels remains far from ubiquitous, especially within the urban environment. It’s not taken for granted as a building material, in the same manner as concrete, steel, wood or glass. Shouldn’t we expect it as part of every home we live in? Every building we occupy? Isn’t this the promise that solar technology allowed us to dream of? Why has that dream not become a reality? Why indeed.

Projecting 20 years into a hopeful future, the current generation of PV technology will be replaced with more efficient technology. PV technology will proliferate across both dense and sparse urban areas. At first, the inclusion will be a demand, this will then quickly become an expectation. Our urban landscape and means of energy generation will change.

We’ve already had 100 years to solve this. Time is no longer on our side.