A massacre of concrete.
— Le Corbusier

While work on the Unité d’Habitation, a residential behemoth in Marseilles, Le Corbusier (the godfather of sweeping concrete forms) was presented with an over-abundance of concrete, ‘a massacre of concrete’. Two choices would help define an architectural movement. A movement that would spread and polarise both public and professionals to this day.

The first choice made was the lack of treatment offered to the concrete itself. It was left un-grouted. Naked. Bare. This towering complex intended for 1600 working class people celebrated concrete as a material. The seed was planted. What was a direct result of circumstance would be extrapolated many times over.

The second choice made was in the terminology, referred to as bare concrete, in French, béton brut. A transliteration was the more dramatic choice to a direct translation. Béton brut led to brutal, which became Brutalism.

After the upheaval of the second world war, humanity began picking up the pieces of what remained and began the slow process of rebuilding. The architectural practices of the world found an available material that they could congregate around. One that could be pushed and presented in a manner not experienced before. Borne of cheap and seemingly abundant material (refer to issue 017). For a period of 30 years (between the 1950s and 1980s) this form of architecture reigned supreme. The style was versatile enough and employed across a multitude of functions from schools and universities to churches, libraries, theatres and social housing projects.

The origins first embodied in Marseille, would take hold in the UK, Eastern Europe, the USSR and the United States. While the works varied across countries and regions, one element they shared was that they stood grand and imposing above all who glanced at them.

Brutal | Adjective
Direct and without attempting to disguise unpleasantness.

Brutalism is hard to define but easy to recognise.

Reyner Banham was an architectural critic that became the voice of the Brutalist movement. His defining contribution was an article published in 1955, which attempted to introduce the tenets of Brutalism. The following are a interpretation of Banham’s original language. Brutalism shall:

Described in these abstract terms, these tenets could be used to define spectacular structures of varied interpretation. These ideals fall apart when they come face to face with the realities of a project.

Many projects defined in the Brutalist style may have been memorable, not in a positive way. They were devoid of context. The structural form, on display in intricate ways, failed to define the why. Often the answer was, just because. What was borne out of being true to the materials, did not consider time or the elements. The affects of weather and the need for maintenance.

The most egregiously omission from these tenets is any mention of the actual end user. What is the basis of the interaction with this type of building? Devoid of this consideration or regard, the buildings had a polarising effect. For many they did not inspire; they did not delight; rather they assaulted the visual landscape. Brutalism came to represent a different set of ideals. Excess. Raw Concrete. Form over function. Expression for expressions sake.

Drunk on the excess of concrete that came at a low cost, there was little resistance from a world hungry for solutions to address the shortages in building stock as a direct result of the war. What came before was rejected in place of a stark expression of change. This attitude was afforded in part due to the psychology of the world after the war. Unlike many thoughts and ideas, this form of architecture would spread across both sides of the Iron Curtain.

Streets in the Sky

In the UK, Alison and Peter Smithson, an architectural couple, took on the mantle of leading and guiding this movement. They not only embraced the term itself but also pushed the form in ever more audacious directions.

Their defining project was the Hunstanton School which is actually an elegant and lithe design. Squint a little and you could see the brutalist styles starting to take hold with their building for The Economics and the Garden Building project. Across the UK, this form of architecture would continue to spread. The reality was far displaced from the original vision.

It wasn’t until the Robin Hood Gardens housing project that Alison and Peter Smithson went full Brutalist. Their concept for this project was ‘Streets in the sky’. In practice this concept was flawed. The development became a haven for crime as the architecture failed its purpose. This failure would signal the beginning of the end for Brutalism, which had begun its descent from favour.

Towards the end of the 1970s the Soviet empire would need new forms of architectural expressions. Its purpose was two-fold. Their primary function was to accommodate the necessary functions they needed - ministries, hotels, monuments and housing. They also needed to inspire the grandness of the party. It is in this second function that led to an incredible range of projects that pushed Brutalism into previously unexplored territories. 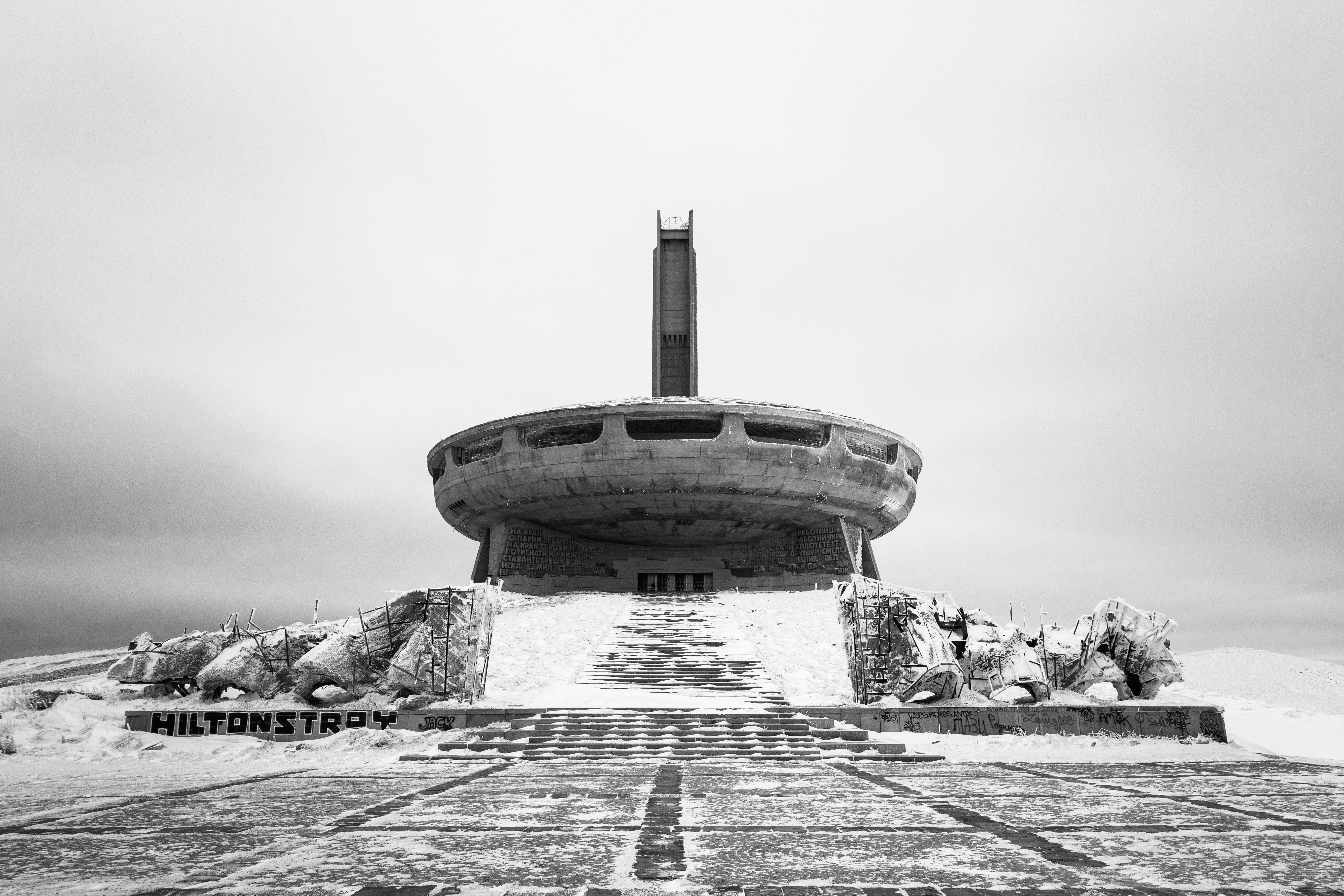 Soviet architects seemed untethered to what was necessary. Circular buildings that looked like UFOs were commonplace. Taking Le Corbusier’s earlier teachings to heart, they lifted many buildings of the ground for no reason at all. Each building madder than the one before. The period before the fall of the Soviet Union was a fertile ground for architectural experimentation. Some notable examples include:

In the United States, the Brutalist expression of architecture took on a different status. The confluence of America’s need for a number of civic buildings in the 1960s coincided with the emergence of Brutalism. These buildings sought to represent the zeitgiest of a nation in the midst of building its empire. By their nature, these designs communicated strength, power and stability.

The hallmarks of Brutalist architecture remained unchanged, there is an undeniable sense of scale not on display elsewhere. A likely contribution to this elevation was the deftness of architects involved. Paul Rudolph established himself as one of the masters with defining buildings at both the University of Yale and Massachusetts. The likes of Louis Kahn and I.M.Pei would also contribute to the scene.

By the time the idea arrived on the shores of the United States, the linguistic damage had already been done. The label came attached to the idea. It stuck because concrete is not a soft and natural material. It is grey. It is harsh. And yes, it is brutal. It didn’t matter what Louis Kahn, Paul Rudolph or I.M.Pei had to say when their work was described in this way. The label was an apt descriptor of this form of architecture.

This hasn’t stopped the authors behind the book Heroic, released over five years ago from attempting to change this. Their proposal is a change in terminology from Brutalism to Heroic. While this change hasn’t gained much traction, it does further highlight the difference in attitude between how these concrete monsters are considered across the world and what they have come to represent.

By its very nature Brutalist (or Heroic) buildings lack humanity. They lack warmth or softness. Their harsh lines and imposing stature do not integrate with their surroundings. They stand out. They are also the legacy of a different time. In the UK these buildings would come to represent ill conceived poor social developments. In the Eastern European countries, the buildings would come to represent a past many would rather forget. It is not a wonder that these buildings would in fact be rejected by a very different world than what existed in 1950. Systematic, the dismantling of these works has begun.

Nostalgia is a powerful emotion, while beauty is a subjective one. These emotions have manifested themselves in conservation campaigns intent on saving or restoring this achitecture, such as SOS Brutalism. Brutalism was borne of a world dealing with trauma. The reaction to this trauma was manifest in part to a very specific expression of architecture that spread across the world. It marks a moment in humanity history that deserves to be remembered - although not every example does.

We are at an inflection point. As we try to come out of a new trauma, which is currently inflicting the world, our aim should pivot into a more sustainable future. 70 years ago, the trauma led to Brutalism and the widespread overuse of concrete. This expression of the built environment made no consideration to its future. Every metric we have shows that we are using more of everything. This is not sustainable as our Earth is not growing at any pace. We should learn from our past transgressions. The irony being that our future world needs a sensible and sustainable approach and this includes the use of materials borrowed from the past.

When Art Gensler and his wife Drue started their architectural practice back in 1965. It would have been hard to imagine that this venture would become the largest architectural practice in the world. At 85 years of age, the architect who passed away on the 10th of May, leaves an impressive legacy. One of the most important is pivoting architecture into a lucrative businesses that is not dependant on the work of an individual.

The works of Steve Areen

As a counterpoint to everything that Brutalism has to offer, Steve Areen has been creating projects with 2020s in mind. His latest is a DIY wagon home built with recycled materials. This follows on from his Dome house in Thailand, constructed in six weeks.

It is hard to deny that Soviet brutalist structures are exceptionally photogenic - probably because they are so uniquely insane (in the best possible way). Fuel Design have a number of publications that all celebrate Soviet flavoured Brutalism. From Soviet Bus Stops (volume 1 and volume 2) to Brutal Bloc Postcards.

Osnovy Publishing has a wonderful collection highlighting Soviet buildings and structures from the Ukraine.

While not Soviet, I enjoyed Nick Coupland’s Brutalist drawings. His book Modernist Lines - Brutalist Shapes which can be found here.

For those who missed it, Dieter Rams celebrated his 89th birthday on the 20th of May. To celebrate Gary Hustwit released his ‘Rams’ documentary for free for the day. For those not familiar with Hustwit’s work, you are in for a treat. To stay on ‘brand’, start with his third documentary ‘Urbanized’ which is all about how cities are designed. My favourite has to ‘Objectified’.

Back to Rams. The documentary has a short segment about the sublime Vitsoe 620 Chair first introduced in the 1960s. Wonderful piece of design, the only negative thing about this chair is the obscene price tag.