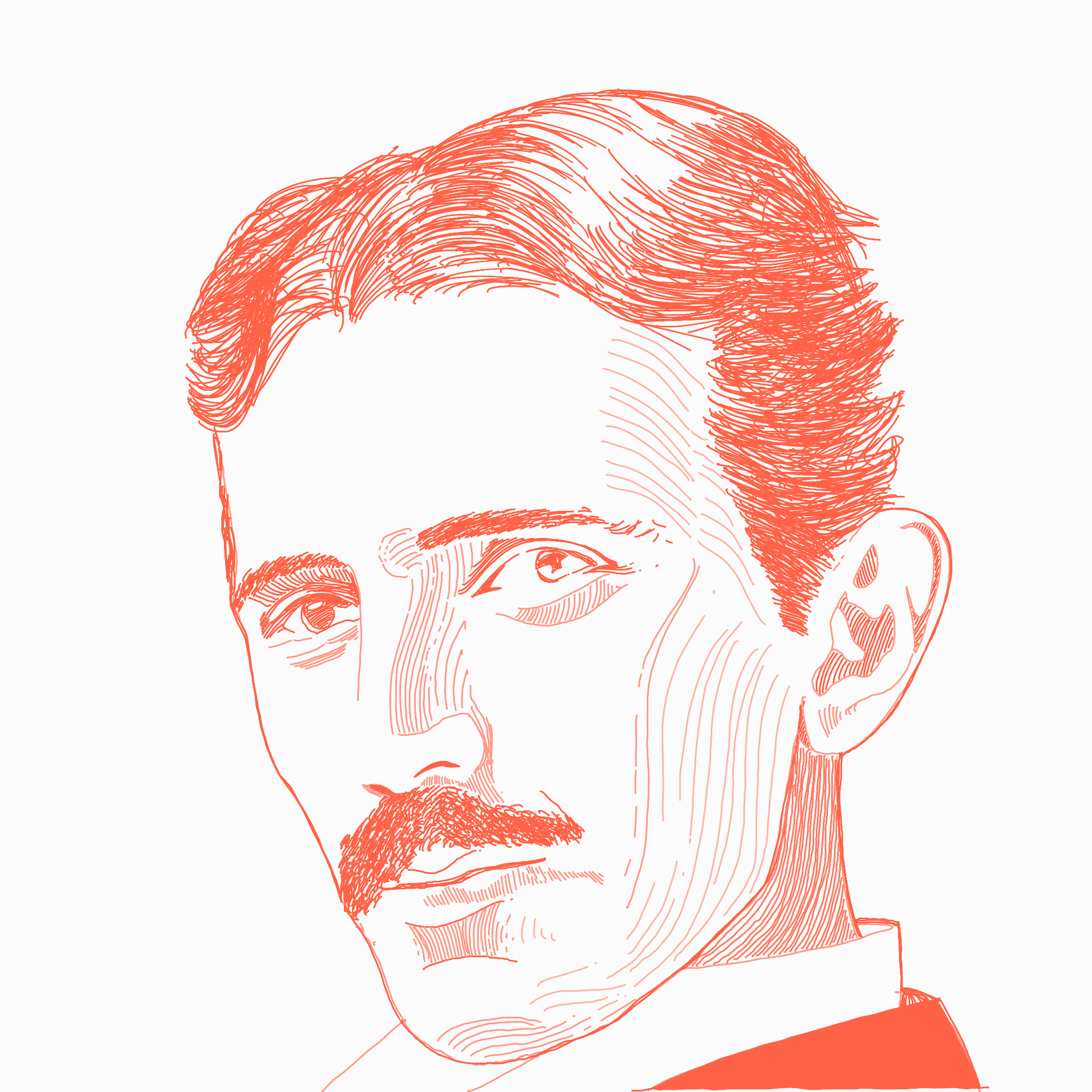 Around the turn of the 20th century, the undiscovered possibilities lay before those actively curious in electricity. Electricity was analogous to software 100 years later. Thomas Edison gave us electrical light. Guglielmo Marconi gave us the radio. Nikola Tesla gave us alternating current. These pioneers would transform our world in profound ways ushering in the electrical industrial revolution.

This was a period of unfettered experimentation. We had not defined the limitations of our knowledge and its applications. Electricity was at the centre of the scientific zeitgeist for some 20 years celebrated at the time in a 600m2 tiled canvas, ‘Electricity Fairy’, commissioned for the 1937 International Exposition in Paris.

Some of the ideas hatched in those days would not gain traction for another 100 years. We are now finally edging towards a transition towards the electrification of our personal transportation infrastructure. This required many scientific advances to come first and pave the way. The speed of discovery would slow down. The ambitious ideas sprouted during this period were either too ambitious, naive or early. Our knowledge of what was possible with electricity and its applications, would instead move away from a steep curve to a gradual one.

One idea, that has become even more vibrant today than when it was first conceived is the concept of wireless power transfer (WPT). If we could beam electricity rather than carry it within cables, the possible applications seem endless. From the simplest infrastructure implementation, power could be transmitted to rural areas currently dependent on standby generation, or on limited solar infrastructure. At its most ambitious, WPT technology could be combined with space based solar power and transform our energy production. The technology would impact how we interact with our buildings and rewrite what is even possible within them. Untethered to the cable is like being unhooked from a lease. It is a grail idea that 100 years later has not been solved, and may never be realised. Back in 1901 however, it felt like the solution was just within our grasp.

In the village of Shoreham, New York, there exists a ghost. The ghost of a building that began construction around 1899. The building itself while unassuming, was the manifestation of a much larger idea. A single story centre pitched roof building with a short spire at the very centre of the building, it housed a number of functions, laboratory, storage, workshops, plantrooms. These were all ancillary and in aid of the true star of the show, a separate structure which sat directly behind. A 57m (186 ft) wooden tower in the shape of a cone. A rounded head sat on top (called the cupola) added another 21m (68 ft) to the overall height. The building (and adjacent tower) were called the Wardenclyffe Tower, but would later be referred to as the Tesla Tower. This would represent the peak of Nikola Tesla’s work on trying to solve wireless power transfer. He had a different name for it, he called it the world wireless system.

The start of this journey began back in 1894 when Tesla successfully built the first Tesla coil. The device amplified both the input voltage and frequency to a degree, which would then cause electrical energy to discharge, uncontrolled in all directions. The device acted as a proof of concept of a world with wireless transfer of power. All that needed to be solved was understanding and solving how the output could be controlled and directed. By the early 1900s Tesla had amassed a considerable fortune being the chief designer of alternating current systems and the inductive motor (which were licensed to Westinghouse). He would go on to spend this fortune, along with two decades of his life, in the pursuit of this idea.

The Tesla tower. which would sit at the epicentre of this idea, was a vertical Tesla coil with a grounded base. Tesla was looking to create a system that could use the Earth’s atmosphere to transmit both telecommunications and power. The tower’s fate would symbolise Tesla’s considerable fall from grace as he perused his ‘world wireless system’. After 16 years, the structure was pulled down and demolished for scrap to pay off Tesla’s debts. His audacious vision remains unrealised, because it was always unrealisable. Yet Tesla’s work in this field would allow the world to shift into a wireless future, just not the future he imagined.

There are two active streams of wireless power transfer (WPT) being developed, near-field and far-field. Both look to cut the cord while delivering power but in different ways and with different advantages and therefore applications. The key variable is the separation distance or range. That is the distance between the element sending and the element receiving the power.

This distance has been one of the biggest (and hardest) technical challenges for wireless power transfer to solve. The issue is compounded as the range has a direct impact on the efficiency of the proposed system, which in turn impacts the overall viability of the solution. Ultimately the reward did not justify the costs and so this technology was very niche, until recently.

Near-field inductive coupling utilises a pair of coils to transfer energy in the form of magnetic fields from the transmitter coil to the receiver coil. The technology owes its start to Tesla (his patent for Apparatus Transmitting Electrical Energy was granted in 1914) but had limited traction until many decades later. The limitation were not confined to the distance between the two elements measured in mm), but it was also been a question of orientation and a question of utility (peripheral technologies were also no sufficiently mature).

With the technology being developed, many of the original induction power transfer (IPT) challenges have been resolved. Existing solutions offer increased range (cm rather than mm), are orientation agnostic and offer much higher efficiencies (typically above 90%). Combined with the many advances in battery technology (see issue 015) this combination looks ready to allow IPT technology the opportunity to shine.

The number of companies jostling to be the dominant player in this space is expanding. Witricity offers a license for others looking to incorporate this technology into their own designs. Toyota being the biggest name - although they do have an impressive number of companies already onboard. Others such as IPT Technology, Plugless Power, WAVE, Hevo and Momentum Wireless Power are either offering (or developing) proprietary systems across the mobility spectrum (cars,buses, trains and everything inbetween).

The marketing will have you believe in charging capabilities being integrated below the streets. Autonomous vehicles that ‘snack’ on electric power throughout the day, never running low. It is a compelling future to imagine, which is on the edge of realistic. In practice installing wired infrastructure throughout cities (even if limited to every few km) is a colossal undertaking for any city. Cities and towns with poor public infrastructure and transportation will likely never see this type of transformation.

The other type of WRT are the far-field methods, relying on microwaves and lasers to transfer the power. The use of microwave technology to to solve wireless power transfer dates back to 1964 when William C. Brown applied omni-direction WPT to a flying mini helicopter (or drone). The next breakthrough came a decade later, in 1975, when NASA demonstrated their WRT technology by transmitting 34kW of power around 1.5km at an efficiency of around 82%. This still remains the record for high power long distance wireless power transmission. he timeline for advances in this technology is measured in decades, Hiroshi Matsumoto successfully powered a small airplane wirelessly in 1992.

The latest addition to this line of technology is Emrod a startup based in New Zealand. They have taken the audacious idea, planted by Tesla in 1906 and developed it in a different direction. They are proposing using a uni-directional system rather than an omni directional one. They are now looking to beam test their system over a 200m distance - a significant move away from their indoor only trials.

While these applications are intended for large infrastructure, laser technology is also making inroads for application inside buildings. WiCharge unveiled their solution at CES2020, the company is positioning their Aircord products as a means of sending small amounts of power at different distances (less power for longer distances and visa versa). This technology runs a safety beam around the main power beam that shuts the system off when interrupted. While not the most elegant of solutions (it relies on batteries or capacitors to ensure continuous supply).

100 years after the electrical industrial revolution we are edging closer to having available solutions that obfuscates the need for binding agent of the 20th century. The reality is not as sensational as we would have wanted to believe was possible, but that means there is plenty of room to grow in this field.

Its not about the vision that is always impressive with these largest-in-the-world projects. It not the architecture either. When it comes to scale, its all about the engineering. Even then, its rarely about the design. It’s all about the construction. Its one thing to design something. Its something different to make it happen. The Ain Dubai, which opened its door this month, is yet another celebration of what humans can achieve. Now why you would want to achieve this is another question.

All the way back in issue 007, we were left wondering when timber would achieve its Eiffel Tower moment. The Sara Kulturhus, in Sweden, may not be that moment, but it is edging us closer. At 75m, it signals the start of things to come.

I have failed to find the correct attribution to the quote, ‘the future looks old’, but if we are to embrace a circular economy, then this concept becomes a necessary tenant. One is a fluke; Two is a movement. Circular economy should not be a buzzword, or a toolkit, or a concept. It should be a practice. Japan is leading by example.

The Nomad Architecture YouTube channel is a great place to start. Then head over to the site, where the first book Tents is following an interesting model. A form of self realised kickstarter, the book is 52 pages that capture a point in time that lays the foundations of a larger future tome.

For those unfamiliar with Dutch bicycles, this primer is well worth your time. Every part of the bike is intentional and considered for a practical people. While Denmark is well known for their Christania brand of cargo bike. When it came to deciding which cargo bike to get for the family, I decided to go all Dutch on this thing and got a Babboe.

There are likely only a few places in the world where riding a cargo bike safely is possible - for multiple reasons. This space is rife for development as small electrical motors have made bikes, that may have been hard work otherwise, into pleasurable affairs.