A New Era of Mega Factories

The Giga Texas building officially opened this month, 2 years after construction began. It instantly became the second biggest build (by usable volume) in the world after the Boeing Everett Factory. The building is 1166m long and 24m high.

Aside: I couldn’t find details of the width of the building so if anyone knows please drop me a line.

Drone operator Joe Tegtmeyer has been tracking this site for a while, this video from February gives a short overview of the building. More recently uploaded videos continue to track progress around the site. If you are wondering why this building needs to be so large, this image shows what is going on inside the building which includes it’s own battery production under the same roof. 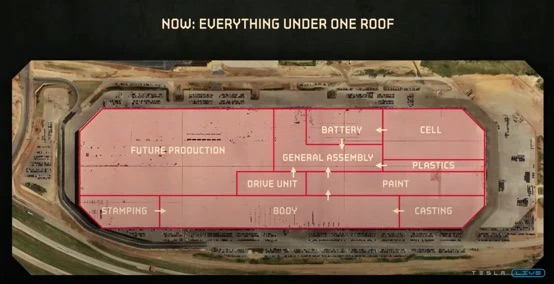 As we progressively head towards an electrified future this type (and scale) of building will likely proliferate at an incredible pace right across the world. For any number of reasons (take your pick, climate change, geopolitics, energy independence) we are in a global battery arms race. Depending on who you read/believe/follow, estimates show that between 30 and 180 mega battery factories will be built globally in the coming 10 years - 35 factories are planned in Europe alone.

Tesla is far from unique in this endeavour, rather they are ahead of the curve. Established players (who will not go down without a fight) will look to play catchup, while new (and relatively new) startups will look to capture a portion of this market. They will all need massive facilities to allow them to reach their ambitions.