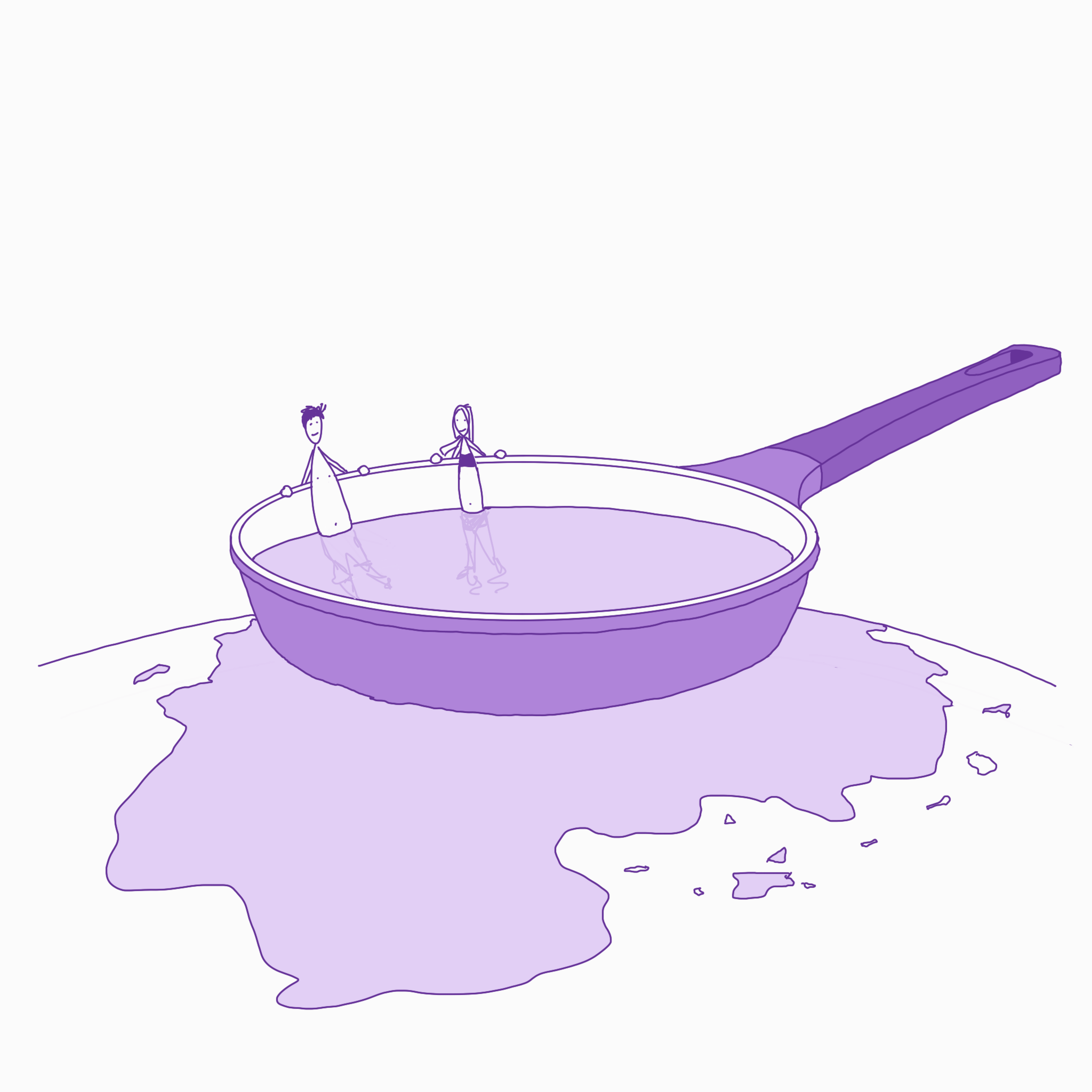 On the 1st of August, 1955, Life magazine ran a page promoting ‘throwaway living’. In a decidedly less global world than exists today, the direct taken by America during this period would resonate around the world. As globalisation extended its reach, these principles spread far and wide. These principles promised convenience. Minimal effort. Speed. There was no mention of the price we would have to pay for this new way of living. As it turns out convenience and ease always beats price anyway. Unfortunately for us the price to pay was the health and wellbeing of not only our planet but everyone living on it. 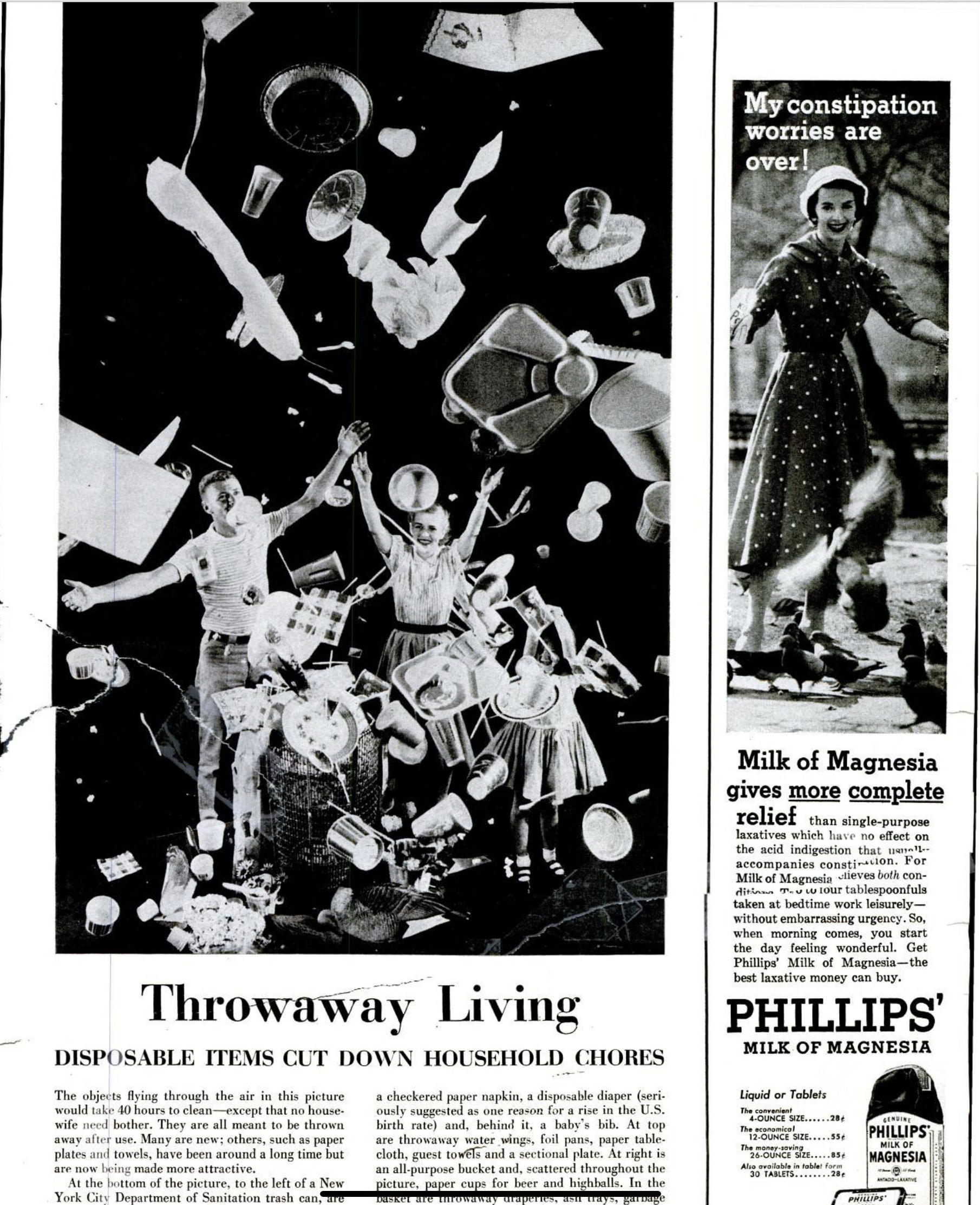 You can read the entire magazine thanks to Google Books. The ad in question is on page 43.

This advert didn’t invented a new way of thinking, although it may have coined the term ‘throwaway living’. Rather it signaled the start of a new normal. One that took our post-industrial and linear lifestyles to the next level. Enabled by cheap, injection molded plastic we set on a trajectory of convenience that we have been riding for over 60 years. Convenience and resistance to change made it difficult to even consider changing course. Dishearteningly we ignored any warnings and ideas to steer us to better destinations. Rather we continued steadfast on our original course, where we find ourselves now.

Like the fable of the frog being boiled, we find ourselves in a pan starting to simmer and quickly reaching boiling point. Regardless of the climate change skeptics, a group of people who exist in the same orbit as Flat-Earthers, it is clear that our current direction is irresponsible and hardly sustainable. In answer to this, the collective solution we are huddling around, are the concepts encapsulated by the Circular Economy (CE).

By Any Other Name

In 2012, the Ellen MacArther Foundation released the first document promoting the benefits of Circular Economy and how this was not only necessary for the planet but also for business1. It established the CE model based on three principles:

The foundations of CE are not new, rather the model combines and builds upon other schools of thought, which include the functional service economy (performance economy) of Walter Stahel; biomimicry as described by Janine Benyus; the industrial ecology of Reid Lifset and Thomas Graedel; natural capitalism by Amory and Hunter Lovins and Paul Hawken; the blue economy by Gunter Pauli; and the Cradle to Cradle design philosophy of William McDonough and Michael Braungart.

The rise in popularity of this model can be attributed across two reasons. Firstly, there is a greater sense of urgency in tackling climate change as the destructive consequences of our actions are being showcased more viciously and frequently (see issue 018). We want a solution. We need a solution. Secondly, the model has tried to position itself as a means of sustainable economic growth for businesses, while finally addressing the needs of the planet at the same time. The message being that these two conflicting aspects of our lives don’t have to be mutuality exclusive or even at odds with each other.

The organizations and companies that have mobilised behind this model offer strong arguments. With a great deal of private and public funds spent to help galvanise results, progress has been decidedly sluggish. Our reality and the possible space that this model occupies are currently leagues apart, while the gap continues to grow ever larger. A major step change is necessary to help us move in the correct direction.

Circularity in an economy is not a measure of the amount of recycled waste. This represents one piece of the assessment. Rather it is a more holistic assessment of the flow of materials, their origins, their use and where they end up. To capture the interconnected complexities of circularity, the Circle Economy, a not-for-profit organization, visualises this flow of material using a sankey diagram2. 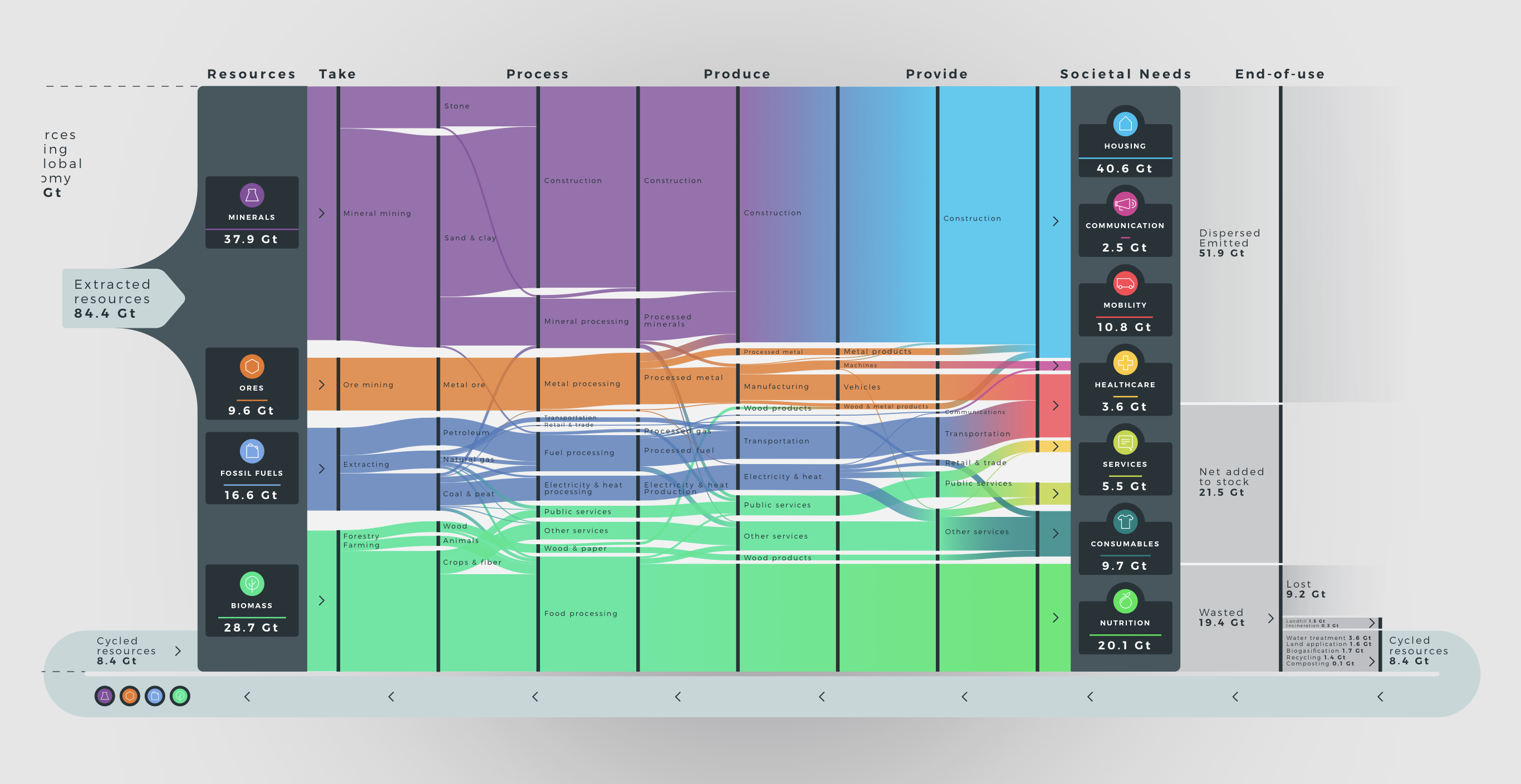 Materials enter the system are either directly extracted or imported and are divided across four main categories:

These materials are then processed in aid of seven societal needs:

A considerable portion of this material will be used to create assets. These assets come in the form of new buildings and infrastructure. The remainder is used for exports and will result in waste. While some of that waste is recycled, the majority of the waste is dispersed (such as waste from fuel in the atmosphere).

Once you start to scrutinize the veneer of circular economy, the truth is that as a race we are terrible at reusing or repurposing very much of what we extract. The recently released 2019 Circularity Gap Report, estimates that we currently have a global circularity index of 9.1%. That is we consume nearly 10 times as much as we reuse - we extract 84.4Gt of material at source, and cycle 8.4Gt back into the system.

This disconnect is attributed to one key area, imports. Contrary to our human defined borders we all share one planet. General imports into a country’s system is defined by the global circularity index. This in general shows how the established global network of materials impacts the circularity of any economy. Countries are of course interlinked. Even if Austria switched to a 100% renewable sources for its energy needs, its circularity index would not increase by very much (from 9.7% to 9.9%).

The real action for initiating change come from addressing imports. Reducing the amount of imports and reusing existing stock would help the balance. Defining, or even imposing, the level of circularity required from imports is the single biggest action that a country can do to increase it’s circularity index. This type of change requires significant coordination between countries. In a world that looks more divided and insular, this cooperation may be even harder to achieve than the technical hurdles we need to overcome.

The Reality and Challenges Ahead

But if your theory is found to be against the second law of thermodynamics I can give you no hope; there is nothing for it but to collapse in deepest humiliation.
— Arthur Eddington

There is a healthy dose of cynicism across much of the construction industry. The question remains of the practical implementation of these principles. Regardless whether you believe in the final destination promised by the CE model, we should all be able to agree on one item. That is, extracting less by reusing more of what we have already is an aspiration worth pursuing. The devil lies in the details.

As a way to move these concepts forward several initiatives have been launched to progress the concepts and showcase what is possible. The BAMB (Buildings As Material Banks) project has a number of pilot projects that have been launched to showcase this model. While the C2C Certified programme hasn’t found widespread adoption amongst manufacturers, there is some movement. The first version of the standard was issued in 2005, now in it’s 4th version, the product registery has managed to attract 610 products. There still is much work to be done, with only 112 products having achieved a Gold level and none have achieved a Platinum level.

The Circular Economy may not end up being about reusing every kg of material. The 2nd law of Thermodynamics will likely have a say as to whether this is even possible. More importantly we are nowhere near this reality, rather we exist at the very start of a process. A process that will take years to develop in order to break decades of linear consumption.

Changing our consumption habits will be met with considerable resistance. More importantly this reversal will require every single person onboard the journey. It is one of the most important struggles that we face collectively as a race. We can’t keep abusing the planet in the manner we have.