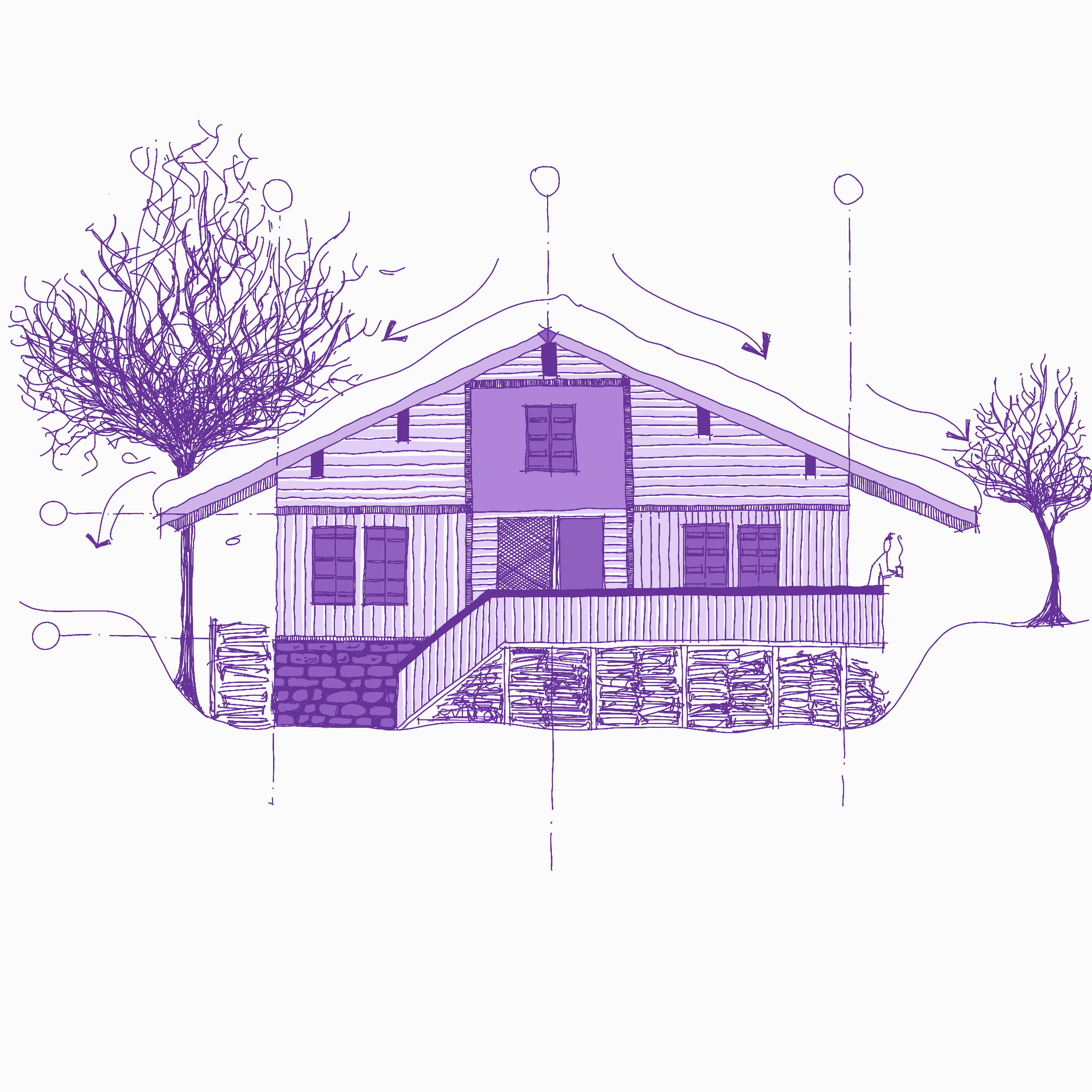 Then. Up in the Swiss Alps, the snow falls heavily. Overnight several meters of snow will fall, while the temperatures will drop to well below freezing. It is a formidable environment to conquer. The built environment is humanity’s direct answer to challenges such as these.

Buildings adopted specific form, that enabled function. The design was decidedly vernacular in nature. The dwellings built in the Alps sought to address two big challenges, snow and cold. By adopting a pitched roof, the snow would slide off the sides of the buildings. This protected the roof from damage caused by its own weight. The eaves were made wide, which created a ring of protection all around the house. This allowed space to maneuver your way out. It also provided storage space for chopped firewood to remain dry. In turn this loose wood formed a much needed insulation barrier. These passive measures did not go far enough to resolve the cold. This required a final innovation. The ground floor was kept shorter than the upper floors and housed the animals. The heat (and smell) would rise to the upper levels - a rudimentary form of underfloor heating. Every design choice was made to facilitate an environment that was in direct response to the elements.

For centuries, the vast majority of architecture and the built environment1 followed vernacular principles. It wasn’t a unified design language. The results were unique and distinct. Across geographies, pockets of humanity adapted and built to their needs. The windcatchers would bring much needed relief from the suffocating Gulf heat. The thick white washed stoned walls of house in the Aegean regulated temperature all year. The bamboo houses on stilts in Papa New Guinea grave protection from floods.

Around the middle of the twentieth century this diverse and varied architectural language was about to fall out of favour in spectacular fashion. As more of humanity moved into cities, technological advancements in construction materials were put to extreme use. At first slowing, then explosively. From the depths of China, to the deserts of Morocco and across cities in Asia — familiar looking buildings began sprouting at dizzying speed.

The form of what we built was no longer tied to its environment. One material became the ambassador of this homogeneity. It allowed this common design language to flourish. The material was exceptionally versatile and worked across continents, conditions and environments. That material is glass.

We can trace the history of glass, as part of the built environment, to the Romans. Unlike Roman concrete (see issue 017, Green Concrete), this technology spread across Europe, then the rest of the world. There it laid in a semi dormant state with only a modicum of advancement over the centuries. It is only in the last 70 years that glass has made incredible technological leaps2.

Undoubtedly, the biggest advancement in glass came from the manufacturing process itself. The float glass process accounts for the production of most glass in use today. The technique was first developed and patented by Sir Alastair Pilkington in 1952. Silica sand is combined with other materials (such as Soda Ash, Limestone, or Dolomite) and melted in a furnace at 1300°C. This is then poured onto a shallow bath of molten lead or tin. The glass forms on the surface and is rolled out. Varying the speed of the roll, changes the thickness of the glass. This method allowed previously unachievable sizes of glass to roll off the production line at a near constant rate. The process is not shy of using large amounts of energy resources due to float glass lines operate 24 hours a day.

The byproducts of this continuous volume of glass was finding new and interesting ways to use it. This has caused a proliferation of techniques that put glass to use in a variety of situations. There is no shortage of different architectural glass available on the market and that list is growing:

While it is commendable that the architectural glass industry continues to innovate in the relentless pursuit of new and interesting ways of manipulating glass. This innovation has come at an extreme, but hidden cost.

Unlike many materials, glass is inherently circular in its lifecycle properties. This inherent understanding of the recyclable nature of glass is understood across the world. An understanding reinforced by the participation in a shared activity of recycling glass bottles of sugary water3. The architectural glass industry has chosen to completely ignore this property of glass as most post-consumer glass is neither reused or recycled.

Most post-consumer glass is neither reused or recycled.

In contrast, the steel industry shows the destination that glass should hope to imitate. The structural steel industry reports that 7% of the steel is reused while an incredible 93% is recycled4. No steel is sent to landfills. Why hasn’t glass followed a similar trajectory? There are several reasons for this.

The first is apathy around this subject, at both governmental and commercial levels. The financial incentives to reuse or recycle the material are scant. Meanwhile government deterrents are not forceful enough. In essence there is little incentive to do this, save good corporate responsibility. This has meant that only progressive Clients or Contractors are taking the steps necessary to dismantle, manage and process post-consumer glass without introducing contaminants.

The second reason is technical. As we have introduced elements to the process, we have painted ourselves into a technical corner. One that hinder the recycling of glass.

Not all sand can be used in the production process. 70% of the raw material of modern glass is silica sand, which is sand with a 95% silica content. An important requirement of the process is the purity of the materials. Cullet is broken glass returned to the furnace for remelting. There are two main types to consider, pre-consumer and post-consumer cullet. Pre-consumer cullet are production offcuts which account for the majority of cullet being used. When removed from sites, the majority of post-consumer cullet either ends up in landfills or is down cycled into aggregate because of the additions and processes that have been made.

This linear lifecycle, shows that we have not given the reuse of the material the significance afforded to it. In a race to provide ever more glass options, the detrimental impact on what happens to this material once its current form and incarnation is exhausted, is not considered. Screen and digital printing uses ceramic frits which renders the glass unusable in the remelting process. Laminated glass is difficult to be used, as the glass itself has to be pulverized to separate the laminate layer. The rendered size of the cullet is no longer useable by float glass manufacturers. Only glass with coatings are suitable for recycling, as this coating is melted off. 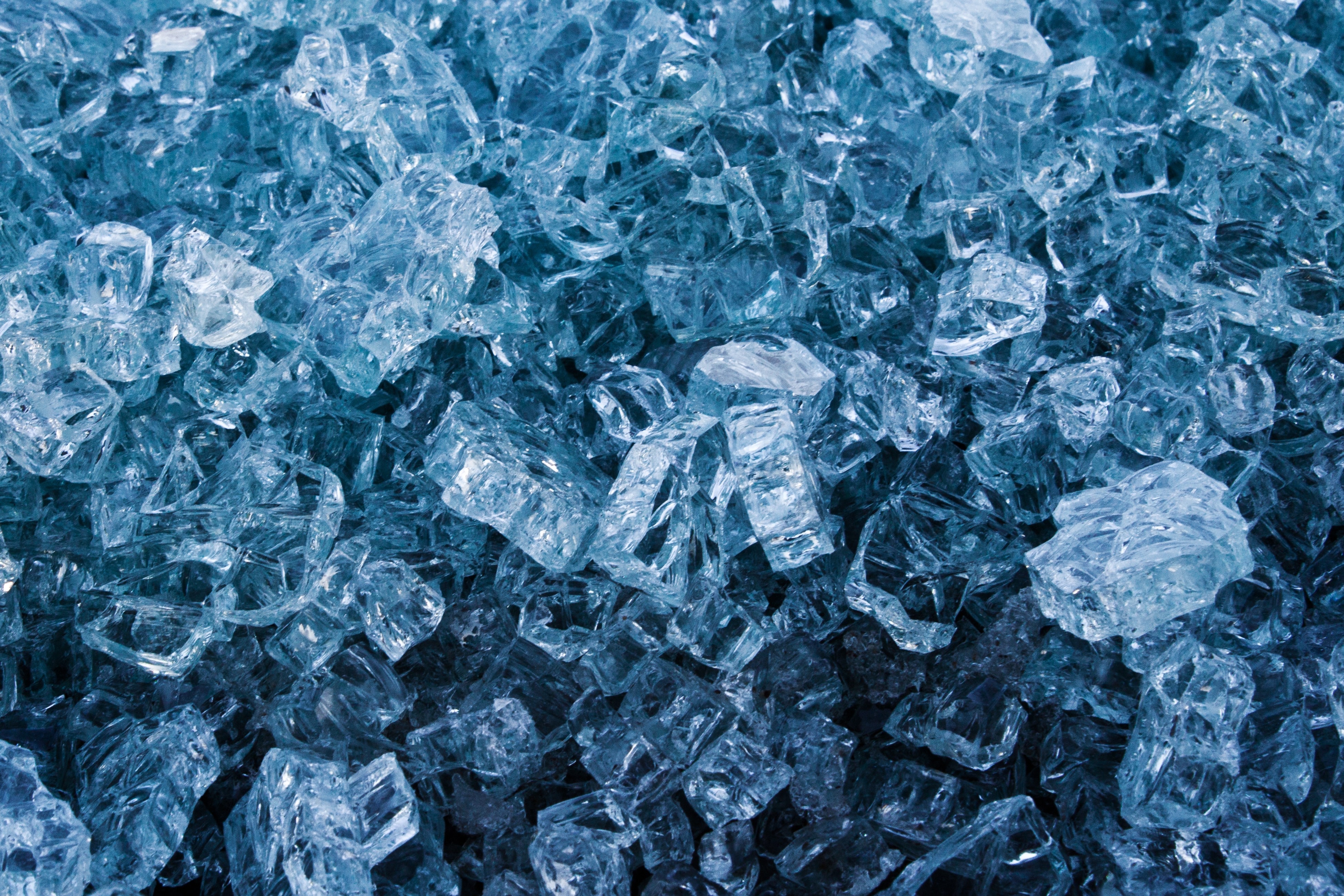 Sand (discussed in issue 017, Green Concrete) remains one of the most used and useful resources in the world. While it is easy to romanticise early architecture, it was borne of necessity. The world has moved on and our technology has evolved exponentially. This has allowed us to construct a built world previously unimaginable. Yet the pendulum has swung far in the opposite direction of function to excess. We have been careless in our choices and approach.

While the glass itself is an inert material and can last for many decades without needing replacement, there are weak points in the system. In the coming decades, the gaskets, seals and frames will near the end of their usefulness. The glass frame will either need to be replaced or removed. While this presents a massive challenge, it also presents an opportunity for those that position themselves.

We must replace the era of wanton excess and single use with methods and practices that attend to our inheritance. We should be ready for the challenges we know are coming.